Luca Brenta B34 for sale

B-Yachts are luxury racers designed by Luca Brenta, an Italian yacht designer who is worldwide famous for yacht designs like the 37m Vitters “Gost” and the 32m Wally “Nariida” ex. “Wallygator”. In orther words, a yacht designer with the highest standards of quality.

Luca Brenta is also known for the extensive research he does regarding the optimal waterlines to develop a balanced design in terms of performance and seaworthiness. This Italian yacht designer is unsurpassed to deliver an elegant design over and over again.

With his experience from the high end segment, Luca brenta has now also designed a smaller range, from luxury racers from 30 feet. In addition to this popular B34, there is also a B30, B38, B42, B52 and a B60.

The beautiful luxury racers are all easy handling, so that there is actually no crew needed to sail, because of the self tacking jib and electric winches and other concepts adopted from the super yacht industry. The hull is very stiff due to the carbon structure and reinforcements.

B-Yachts are built under the direction of Enrico Malingri di Bagnolo, who is also a Sea Independent agent, whose family has been running well-known shipyards in Italy for generations.

The Sea Independent network has been appointed as the agent of for the Netherlands and Denmark for B-Yachts and so I can therefore help you with any information you may wish. I reside for a large part of my time in the immediate vicinity of the shipyard, speak the “language” of the country, which means that I can assist sailors from The Netherlands or other parts of the world very well if interested in this amazing concept.

The interior has a clean, minimalistic, the typically Italian interior design. These luxury racers can be equipped with many comfort options, making it an ideal sporty touring sailor. 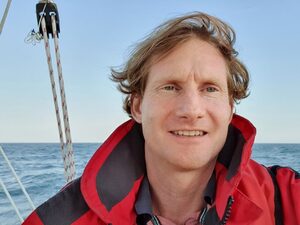